Syria talks in Moscow to focus on humanitarian issues

The Syrian government and some opposition figures will start a second round of talks in Moscow on Monday focusing on humanitarian issues, although a broader agreement is unlikely as Syria’s main opposition group continues to boycott the talks.
Participants say they do not expect any big breakthrough towards ending a conflict that has killed more than 220,000 people in Syria since early 2011.
January’s unproductive first round of consultations in Moscow was shunned by the main political opposition group, the Western-backed Syrian National Coalition. It said it would take part only if the talks were to lead to the departure of Syrian President Bashar al-Assad, an ally of Russia.
The Istanbul-based SNC has said it will also stay away from the second round of talks, due to last until Thursday. Russia says fighting terrorism in Syria should be the top priority now and has called on the opposition to work with Assad to that end.
Randa Kassis, a former SNC member who now favors talking to Damascus because of the rise of radical Islamists in Syria, said the talks would focus on confidence-building measures including ensuring access for humanitarian aid.
“We won’t get to a political transition without slowly giving and taking,” Kassis, who now heads the Movement of Pluralistic Society, told Reuters.
Moscow has not said which opposition figures will attend. But the line-up is likely to be similar to January, when more than 30 representatives of various groups attended, most from groups tolerated by Assad or who agree that working with Damascus is necessary to combat the rise of Islamic State.
The Syrian Observatory for Human Rights monitoring group said Syrian authorities had released 650 prisoners from at least three prisons in Damascus on March 25-27, including women, children, political prisoners and fighters.
A Moscow-based member of moderate Syrian opposition group the National Coordination Committee said that this was not enough, however, and that any attempt by Damascus to tie the release of these people to the talks would be “just an act”.
“We’ll see what the government delegation comes up with, including on the humanitarian front, but I am not hopeful for anything special. It’ll be more of a continuation of dialogue at best,” said the representative, who declined to be named. 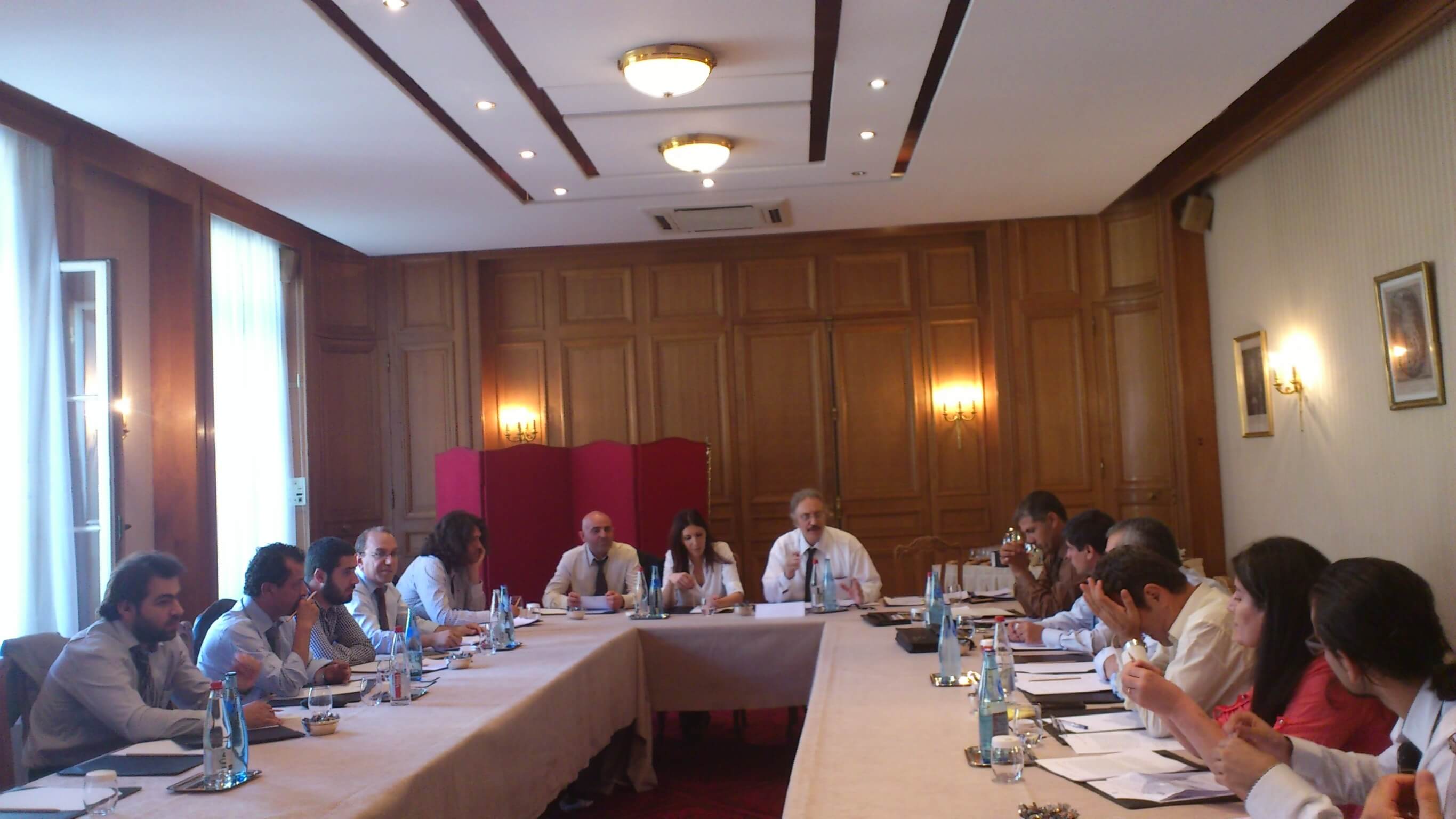 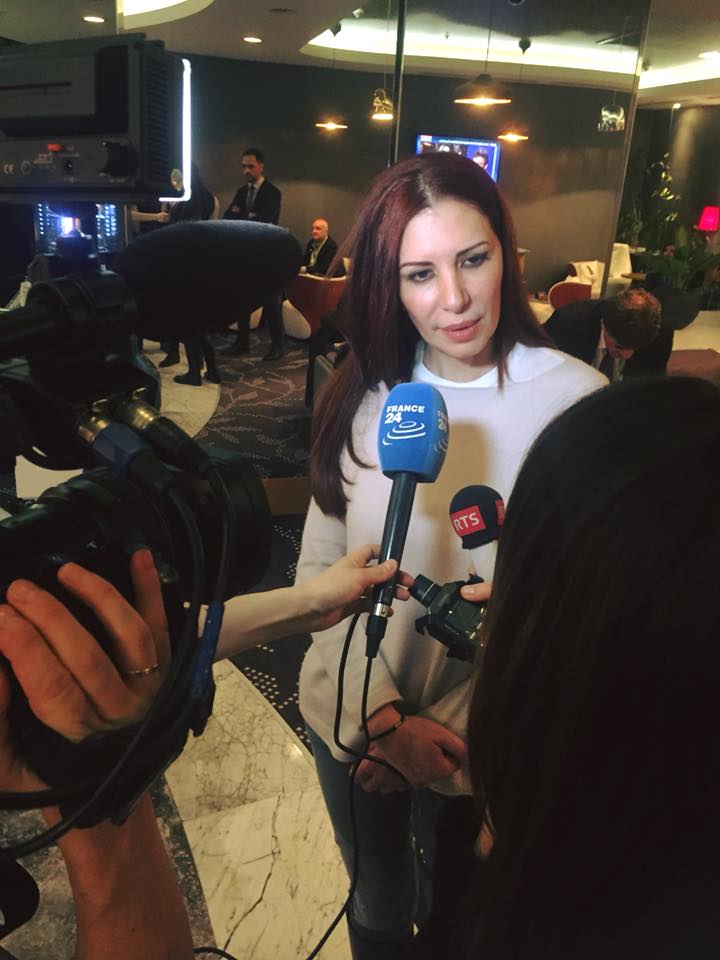 mspsy.com/news/article/8/5-en
Link copied to clipboard.
A secular voice in the Syrian opposition

A secular voice in the Syrian opposition

Randa Kassis, a Syrian secular opposition figure, has been invited to take part in the negotiations in Moscow bringing together Syrians from the Assad regime and members of the opposition at the end of January.
She has long been kept at a distance from her native country, Syria, but she wants to participate in its rebirth. Born in Damas in 1970, Randa Kassis spent her childhood in a complex family scenario, with a Greek-Catholic father opposed to the regime of the Al-Assad family and a Greek Orthodox mother, who was a militant supporter of the government.
Is that why she quickly moved away and became a fierce partisan of secularity? In 1979, she joined her father in Algeria. A professor of psychology, he had left the oppressive atmosphere of a country where the Muslim Brotherhood was trying to overthrow the regime by force. Three years later, she was back in Damas.
Until the age of 17, she made every effort to lead “a normal life,” without getting involved. She avoided enrolling in the “shabiha,” the youth movement of the ruling Ba’ath Party. “I learned to say ‘no.’” I learned how to revolt,” she declares. “But at the time, political life was a lost cause” due to the threats weighing on regime opponents. Close friends of her father spent time in prison.
She left again “in search of herself,” trying painting and travelling. She settled in Stuttgart, Germany, and then in France, where her daughter was born in 1997. She trained in martial arts, specifically kick boxing, “a good way to learn self-control, understand things and acquire self-confidence.” Attracted by the theater, she spent a short time at the Florent school of dramatic arts.
Her political awakening dates from 2007, four years before the Arab revolutions. Randa Kassis listened closely to what was being said and written on the social networks in Arab countries. “I got in contact with groups of young people demanding freedom of expression and rising up against the religious discourse weighing on Arab societies.” She could perceive the desire for change in Egypt and Tunisia. “It was more serious in Syria because the society was more heterogeneous and several regional actors were involved in it.”
She published articles in the Arab press, denouncing the Islamic proselytizing promoted by Saudi Arabia and the emirates of the Persian Gulf and challenged Turkey’s “moderate Islam.” She founded the Movement of Pluralistic Society and took part in the creation of the Association for the Protection of the Right to Freedom of Expression in the Arab World. When the civil war broke out, she was a member of the opposition forum, the Syrian National Council, representing a secular coalition. She was excluded from the organization in August 2012 for her strong criticism of Islamists.
Kassis believes in the power of minorities and in their role in society. Keenly interested in anthropology, she refuses to align herself with any particular group. “What interests me is to change people’s perception. That is what pushed me to write. But writing is not enough; we need to have the power to change things. Being an independent woman may help; it also allows you to push back the boundaries.”
Since then, she has sought to make heard the voices of those calling for a different route. Together with essayist Alexandre del Valle, she has just published a book encouraging political dialogue, national reconciliation, the protection of minorities and the fight against “green totalitarianism.” She was invited, on behalf of the Movement of Pluralist Society, along with 27 other opposition members, to take part in a meeting on Jan. 26-30 in Moscow to prepare possible dialogue with the regime.
“Fifteen opposition members accepted the invitation. But I don’t think the members of the Syrian National Coalition will come,” she said.
The coalition is recognized in some countries, including France, as the political authority of the transition.
“The objective is modest,” she explains, shortly before boarding her flight. “Nothing will be settled by this meeting. But the Russians have succeeded in forcing the Syrian regime to participate in the negotiations, which is already a positive point. What is interesting about this initiative is that it puts the spotlight on the issue of Syria, which everyone has forgotten.”
It will soon be four years since the conflict began. Randa Kassis is convinced that this is a favorable moment for a political solution. “Because everything else has failed”. 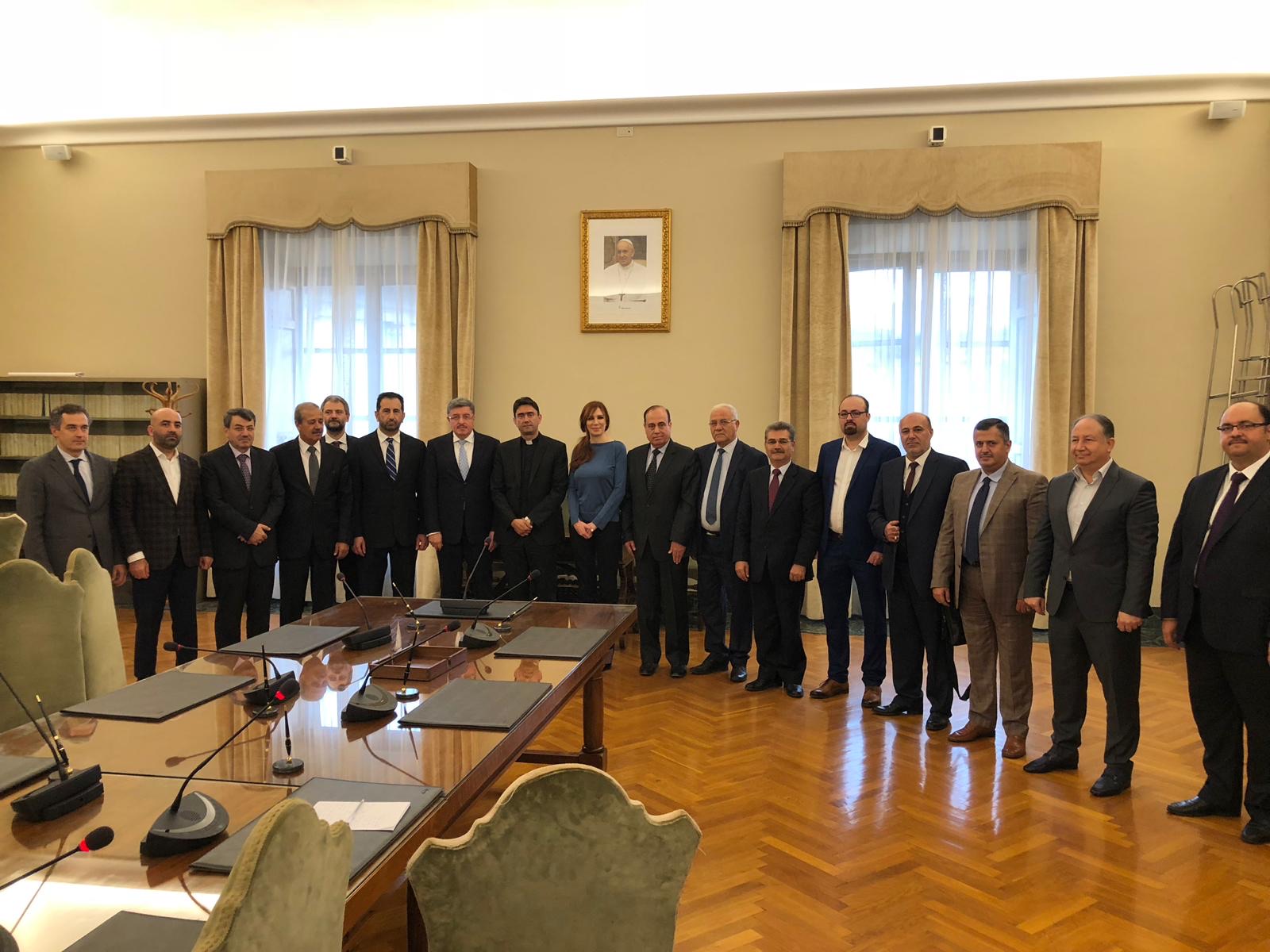 mspsy.com/news/article/8/4-en
Link copied to clipboard.
Meeting between Mikhail Bogdanov, the Russian President’s Special Representative for the Middle East and Africa, Deputy Minister of Foreign Affairs, and Randa Kassis, Chairman of the Syrian opposition Movement for a Pluralistic Society

Meeting between Mikhail Bogdanov, the Russian President’s Special Representative for the Middle East and Africa, Deputy Minister of Foreign Affairs, and Randa Kassis, Chairman of the Syrian opposition Movement for a Pluralistic Society

On 28 November, the Russian President’s Special Representative for the Middle East and Africa, Deputy Minister of Foreign Affairs Mikhail Bogdanov met with Randa Kassis, Chairman of the Syrian opposition Movement for a Pluralistic Society, who is visiting Moscow.
The parties discussed prospects for a political settlement of the Syrian crisis through inclusive national dialogue aimed at reaching mutually acceptable agreements on the basis of the Geneva Communique of 30 June 2012. In this context, they exchanged views on Russia’s initiative to arrange consultations in Moscow for representatives of the patriotic Syrian opposition. 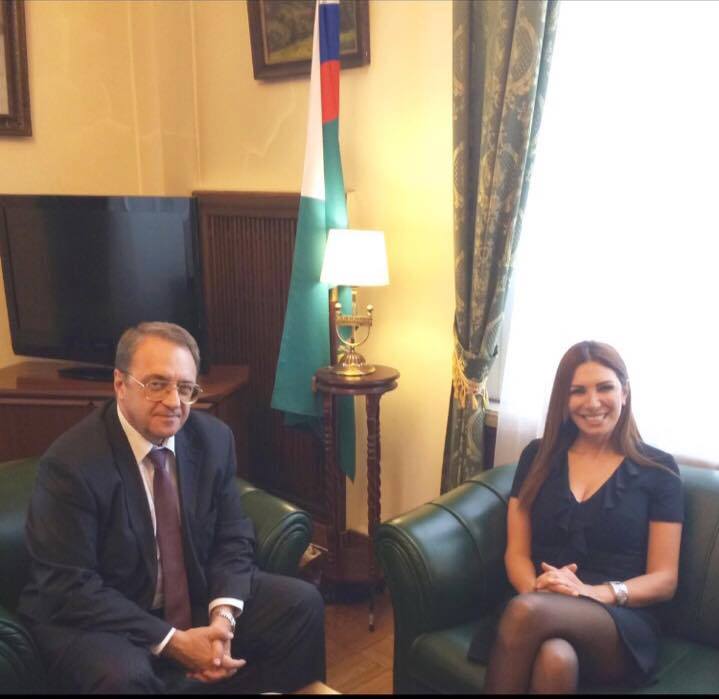 mspsy.com/news/article/8/3-en
Link copied to clipboard.
Meeting with the UN Envoy for Syria

Meeting with the UN Envoy for Syria

Special Envoy Lakhdar Ibrahimi met with Randa Kassis, President and Founder of the Movement of the Pluralistic Society.
These meetings focused on Geneva 2 a conference peace on Syria.
They discussed about the preparation an international peace conference on the future of Syria. 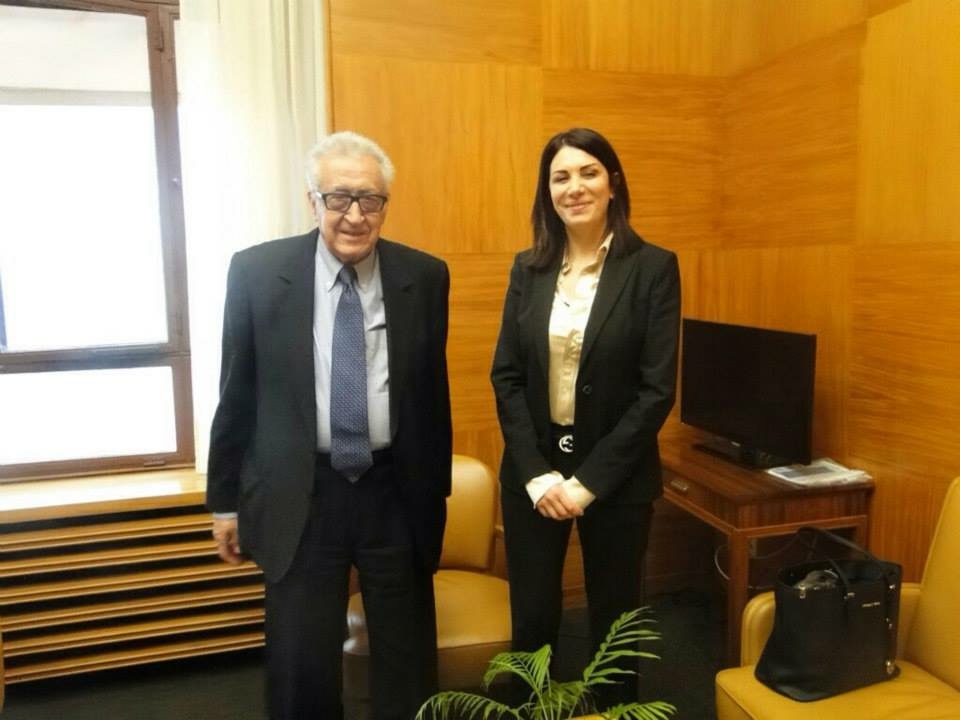 Syrian dissident: Assad will fall only with Alawite help

(Reuters) – A former member of the Syrian National Council, who says she was driven out of the leading opposition group after expressing fear about Islamist domination, said on Thursday President Bashar al-Assad would fall only when ruling minority Alawites jumped ship.
Randa Kassis, a Paris-based secular opposition figure, said the SNC was ignoring the rise in Salafist and al Qaeda fighters in the country and had little contact with the Alawites, let alone a strategy to convince them to swap sides.
“Without the defection of the Alawites, we won’t be able to do anything and we will go straight into civil war,” Kassis told Reuters. What began last year as a mostly peaceful protest movement against Assad’s rule is now an armed insurrection led by rebels from the majority Sunni Muslim community.
Kassis, a writer and anthropologist, said she would unveil a new Syrian opposition bloc – The Movement for a Pluralist Society – in September to challenge the faction-ridden SNC.
It would, she said, be comprised of religious and ethnic minorities, including Druze, Christians and Kurds, as well as secular and pluralist members.
Among those supporting her are Omar Idelbi, from the Local Coordinating Committee in Syria, film director Jamal Suleiman, and Imad Houssari, an SNC member and member of the local coordinating committee in Damascus, she said.
Separate Syrian opposition groups have floated proposals for a transitional government over the last month, a sign that differences among the many factions opposing Assad are deepening even as rebels have made gains on the battlefields.
With fighting reaching the capital Damascus and commercial centre Aleppo, Western countries are increasingly anxious for the disparate opposition factions to agree on a credible plan for a transitional government to succeed Assad.
Kassis said she was sceptical any transitional government would be put in place, given the long history of mutual mistrust among Syrians after decades of police state repression.
She said her group’s primary objective would be to organise mass defections, especially within the Alawite community that she said would hit the regime “hard.”
Their families would first have to be smuggled out of the country, a feat only accomplished with the help of major powers.
There have been no known defections by powerful Alawites close to Assad but some high-ranking Sunni Muslims have bolted, including Prime Minister Riyad Hijab who fled Syria on August 6. A trickle of defections from army ranks has raised rebel morale.
“We are working with Alawites – the children of the old guard – to convince Alawites to defect,” she said. “I don’t think there will be any for the first few months, because how do you reassure a community that feels in danger?”
Financing is her group’s main obstacle, Kassis said, adding that the SNC and rebel fighters had received funds from Islamist groups in the Gulf and the Muslim Brotherhood, helping them to create an “illusion” of legitimacy.
As a result, Kassis said, she would be lobbying anti-Islamist groups for financial backing. She urged Western powers to push Gulf Arab countries concerned with the rise of Islamists to channel their funds towards her group rather than to the SNC.
“I have to try. We’re on the brink of civil war and now with the fundamentalists involved that can push the country into the unknown.”
The SNC recently elected Kurdish activist Abdelbasset Seida to head the group. He has said his priority would be to expand the council and hold talks with other opposition figures to include them in the council, which some have accused of being dominated by Islamists. 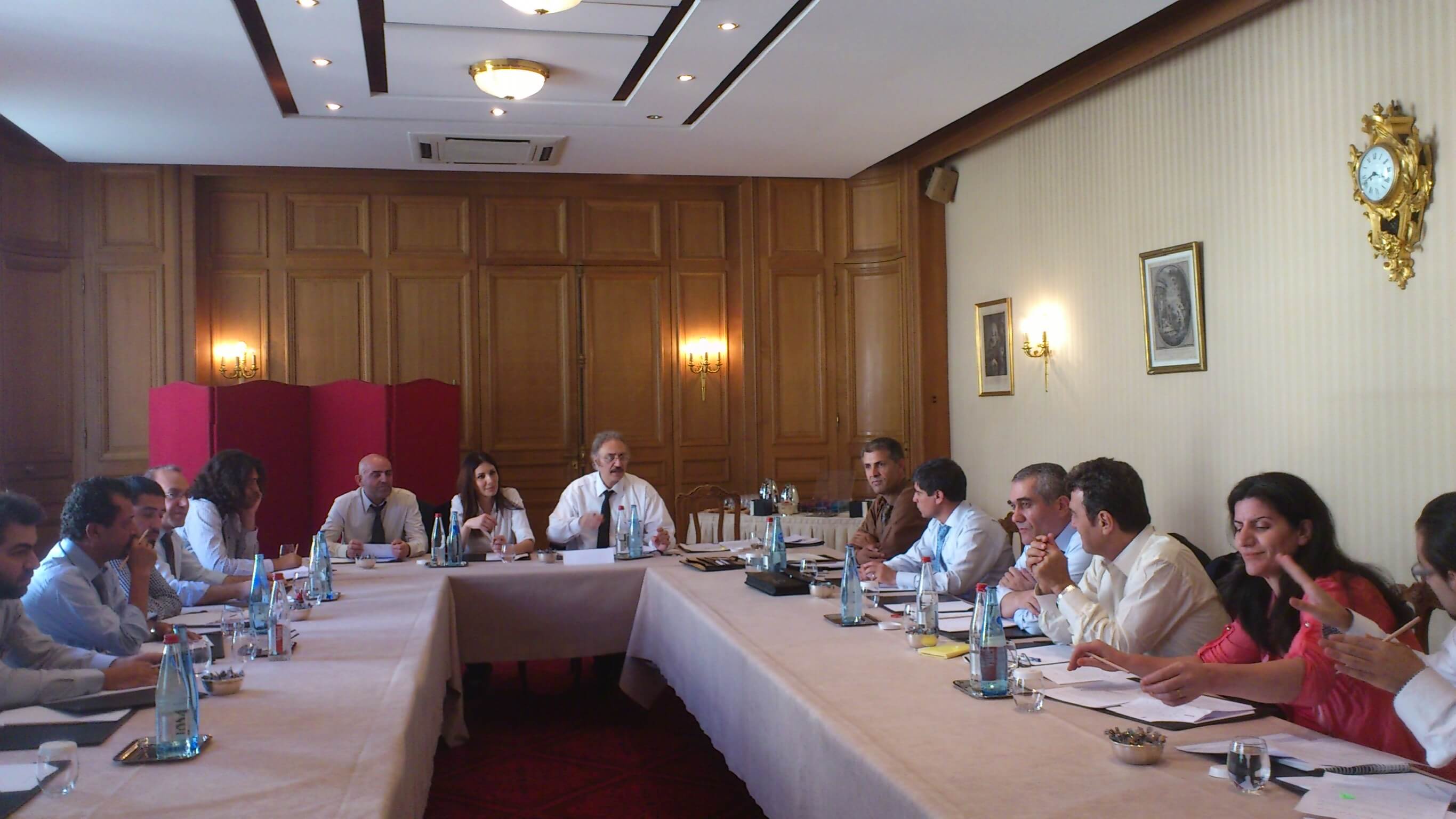